← SW:ToR Community Shoutout…
It’s all about that XP → 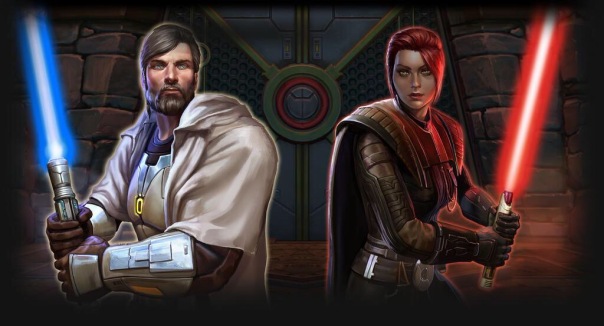 With seeing Bioware partner up with ESL (an esport company) and just a couple of weeks later after announcing the speed run competition. That it was cancelled. Patch notes for March 3rd, stated putting the Coratanni encounter ‘in a better place’. Or is it, being on a friends teamspeak today listening to them do the Cortanni encounter, it may not be fix or a better place. Which brings up the question, could Bioware not get it fixed or the better place? It sadden quite a bit of players, but there has to be some real issues for Bioware to cancel the speed run.

With the Star Wars movie coming out later this year, it’s been speculated that the ‘Choose your path’ is geared to grab new subs and returning subs. And that there is going to be some sort of tie-in from ‘The Force Awakens’. But I can tell you now I see why the next playable race is going to be Togruta. Based on the mid-season finale from Star Wars: Rebels. (I don’t want to spoil anything for anyone). I guess we’ll find out more when the time gets closer.

Class balancing, so according to forums, tweets, and podcasts, it seems that there needs to be some tweaking for Sages/Sorcerors, which are the flavor for PvP right now. And for PvE the heals are in Commandos/Mercenaries. I’ve only recently popped into queue for unranked PvP and I was on my Merc in Innovative Ordinance and I wasn’t sure it that was the best spec for me and I totally forgot to change my utilities for it too. But I’m still learning. I’m not much of a PvP’er.

Hopefully the new outfitter really helps out with legacy gear, cause personally some of the legacy gear looks fugly, and I personally don’t have the patience to try and mix and match legacy gear. But there seems to be quite a hype for the outfitter.

Also just out March 3rd is a new Star Wars book called, ‘Heir to the Jedi’ by Kevin Hearne. I hoping I can get the audiobook soon so that I can review it. I’m still trying to finish up ‘Tarkin’ by James Luceno, and so far it answers quite a few questions but great insight on the legendary Tarkin.

The Gree event came around and there was tons of players out and about getting their Gree on. It was good to finally see Bioware get the Gree upto 60. I was definitely trying to get my Gree rep up, from the last time the Gree were around I was just 1250 rep short for Hero rank to be able to get the offhands. But after the reset I had enough rep tokens to get champion and still have a bunch of rep tokens on my other toons to probably make legend. So atleast I’m happy I can get the main hands now. I do like the way the light beam looks on the lightsabers from the Gree vendor. It has that Gree matrixy look. But I haven’t really looked at the ranged weapons but it’s a good thing that the vendors don’t leave. Doing the operation for Xeno 16 man storymode wasn’t bad, but hardmode 16 man was a nightmare. Don’t even get me started on how many times I had to just drop the op and leave. (Facepalm)

But it would be nice to have new events to the game, I spoke with a few people wanting pod racing. I mean I could see it but wasn’t my first choice on that. I really would’ve like to have the ‘Nightlife’ brought back cause… well… I missed that one. Bioware needs to cycle the events more often, when’s the next Rakghoul event? Or just have the events cycle through more frequently.

But speaking of gambling, some fans would really like to see Pazaak introduced. Including me, but I doubt we’ll see that anytime soon.

And what about Guildship PvP? Maybe with GSF tied into it. And let’s not forget that PvP’ers want a new warzone, there really needs to be more zones at this point in the game. And let’s not forget that PvP’ers want a better queue pop, and I agree with this. Should always try to keep it fresh for you fan-customer base. Maybe with Bioware cancelling ‘Shadow Realms’ and integrating the employees to help with Star Wars: the Old Republic, maybe something more is on the horizon as far as PvP.

Stay tuned to the Force

← SW:ToR Community Shoutout…
It’s all about that XP →