I first want to say that I’ve have some personal things come up and apologize for my late post. But better late then never. Let’s dive into the what happened.

Now during the live stream, everything they pretty much stated was a repeat of the dev live stream a little while ago. That was a little disappointing. But, it seems like Bioware like the response that they had from the Dev live stream and they wanted to ride the carpet keeping the same momentum and energy. To me repeating the same thing loses its pazazz and just feels stale. I understand the direction that Bioware wants to go, Bioware could’ve just recapped and made the rest of the cantina about new things and news. I admire their effort though.

As I stated before in a previous blog post the upcoming 3.2 content is called ‘Rise of the Emperor’, and in my opinion the ‘Shadow of Revan’ was just filler story upto this point. Okay, now I liked the new content and enjoy the new operations. But hopefully Bioware can still flesh out a few kinks still left in the ops. I have enjoyed the story, the build up and I also jumped on the PTS to check out a few things out and got to the end of the first part and it left me with wanting to know more. Bioware and made it a point that it’s story driven, I mean come on who doesn’t enjoy a good Star Wars story. I read the books and new books, and I like them. No one can say that Bioware hasn’t delivered on the story aspect.

In 3.2 a new features like the ‘Outfit Designer’, Ziost, creatures, Sixth Jedi Order, unlocked Taxi’s and Quick Travel points. Now I didn’t spend to much time on the Outfit Designer, I dove into Ziost and the storyarch. And as I stated, I like the story so far. I do look forward to seeing what else the story has to offer. But one thing that I’ve always wanted and hoped for is the class story. In SoR, I was disappointed that it was only a couple of cutscenes and that was it. I did expect more in the Class story department. But I am glad that the Quick Travel point and Taxi’s are all going to be unlocked, it will make life a little easier for leveling up new characters.

And like previously in my blog post the Epic Story XP Boost is a subscriber perk, but if one doesn’t want to partake in the XP boost, you will be able to buy a cancellation item in game that gives you a debuff and when you want the XP boost just click off the debuff and you’ll be able to get your 12x XP back. (But really why would you.). XP Boost starts on May 4th. Atleast now I’ll be able to level up characters on the other servers that I want to play. 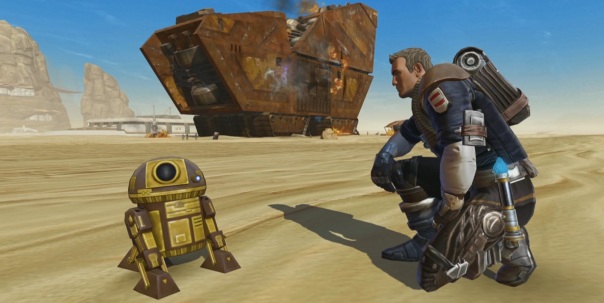 And don’t forget along with the 12x Xp, everyone will get a spiffy new droid on May the 4th. It’s cute, but I still want the Sandcrawler. So you’ll have a new little pet to take with you on your adventures.

Let’s not forget about the NEW Yavin Stronghold with more hooks. Hopefully it’s not too expensive to get but looks like I’m going to have to do the daily grind again to be able to afford it and unlock all the rooms. Yay, money sink!

Lets not forget about the Community Cantina Mount. Now this was a smart thing to do, everyone has been sharing this code on live streams, Reddit, ingame general chat. A little too bright in colors for me but hey, it’s free. And the the extra ingame item is real nice, with a chance to get a deco, dye, regen item, or whatever else.

Last but not least, I would like to congratulate Zorz for their hardwork and determination. Zorz is a guild on Harbinger, and they know their stuff. I watch their stream from time to time when I can get a chance to. I would suggest to those that want to learn how to raid to watch their streams and videos. 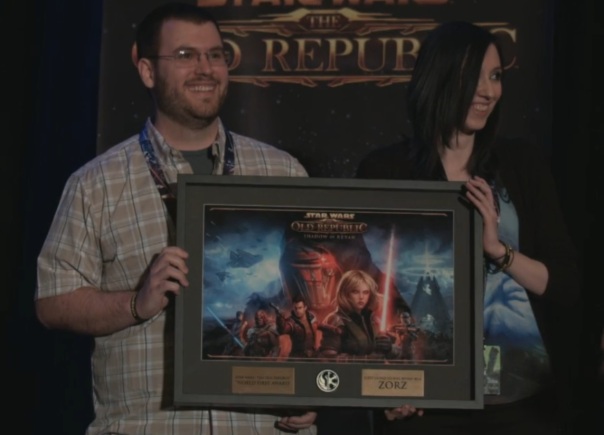 Now the Q&A, (facepalm), they really should’ve asked the hardhitting questions, lots of PvP’ers want to know what they’re getting. There was disappointment after the Q&A. People want to know whats going on warzones, class balances, GSF, guild ship battles. It’s like I said before, if you can dodge a wrench, you can dodge a question. The community wants more, gives us more information. Gives us hope, just a little acknowledgement goes a long way.  The community wants to be engulfed in the Star Wars Universe.  Seems like the RP’ers got more of the spotlight than anything else.

Stay tune to The Balance Force.