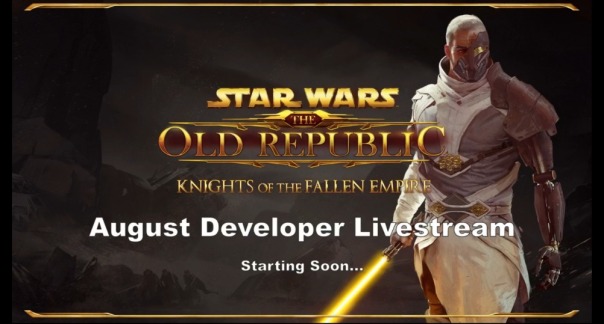 As most of you know, there was a live stream on August 26th at 5pm PST. It gave us a preview of the upcoming #swtor expansion #KnightsoftheFallenEmpire. Now let me just be clear as to I will not post any spoilers, I don’t want to ruin anything for anyone. For those of you that actually want to watch it. There is the following video.

I honestly don’t think that really anything was spoiled, that may be due to the fact that really nothing was given. Here’s what we know, ‘It has story’, it’s what #Bioware said that we as paying customer base wanted, because that’s what their metrics say we want. They did show a slight preview of Chapter three, and honestly looks good, let’s forget about that they had some technical issues with the stream, they must’ve had ‘The Underlurker’ handling the bugs of the stream. And a ending video of a cutscene that might have hinted of who was the familiar face. But I’m not saying who. (Now I sound like Bioware)

A more defined coverage post is on Dulfy.net (with and without spoilers), they gave out a Cantina code during the live stream for the new mount (Prinawe Aggregate). Here’s the code they posted during the stream: https://account.swtor.com/user/ce/26nqz2. Enjoy! It does look pretty cool.

As some of you may already know that there was disappointment on Twitter, including myself at the lack of information that was suppose to come out. We were suppose to ‘see a familiar face’, well, what happened? Who is it?

Okay so let’s dive into this #KotFE:

Everyone knows so far about the story and where it’s going. Hints have been dropped in regards to choices and companions. Nine chapters at launch, and one chapter a month and so on. Now, for me, the story looks good. I do like where they’re going with this, I just hope it’s one of those preview like they do for trailers of movies and we just saw the best part of and everything else is a let down. I hope not. I honestly can’t say anything bad about the story thus far.

Again, I’m not going to spoil anything but I am happy with how they are handling companions in the expansion. Makes me wonder if Bioware had did this particular at the launch of the game, it probably would’ve changed how players experienced the game. I’m okay with how companions are going.

Nothing, nada, zilch, zero, zip! No information. ‘Something awesome’, you know what would be awesome, INFORMATION! That would be awesome. At least an idea of what we’re looking at. ToRCommunity has some information on the site, but please remember, things are subject to change. Nothing is set in stone. As I’ve touched on this before in my previous post, it is very possible that they’re still working on it, who knows.

Notes? Really? Tons of questions? YEAH! We want information about what to expect. The Q & A was really more about the companions, but not really with anything beyond companions. ‘We’re not gonna tell you.’, seems to be Bioware’s new marketing motto. You want people to blindly subscribe/renew and you’re not giving ANY information. Wow, way to go marketing department (end sarcasm). No questions were answered during the live stream, what a disappointment.

Bioware should’ve just named the stream, ‘Companion KotFE’, and left it at that. I know for sure that I’m not the only one that feels as though we were short-changed for information. Okay, yes, it’s understandable that many of us don’t want to have the story spoiled. I get that, I’m right there with you. Do i feel as though things were spoiled for me, no. I’m a subscriber, will I continue to be a sub, probably most likely. I got spoiled with sub status, I ain’t gonna lie. With the information about companions, I can see myself leveling up a few more characters if this part of the ‘streamlining the leveling experience’.

It’s now less than two months away from the release of the KotFE expansion, and we’re barely getting a drop of information to quench our thirst for the game. I’m not going to get into a long rant about marketing, I said what I needed to say in my previous post and I’ll leave it at that for now.